They are also £2 coins. You just let that sink in…

In case anyone was still wondering what “the sum of ten pounds” is, promised by their bank of England note, it SHOULD look something like that. Now you go try asking the bank cashier to redeem your note for it’s worth/promise.. and watch security quickly drag you out the building. 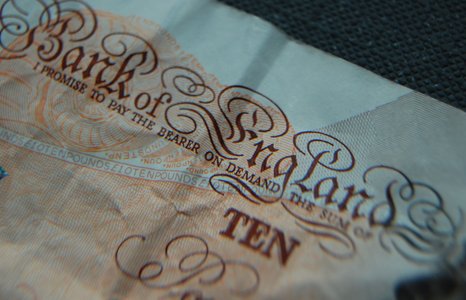 Translation: MONEY IS CREATED OUT OF THIN AIR

“The modern banking system manufactures “money” out of nothing; and the process is, perhaps, the most, astounding piece of “sleight of hand” that was ever invented. In fact, it was not invented. It merely “grew”. … Banks in fact are able to create (and cancel) modern “deposit money”, just as much as they were originally able to create, or call in, their own original forms of private notes. They can, in fact, inflate and deflate, i.e., mint, and un-mint the modern “ledger-entry” currency.

Banking was conceived in inequity and born in sin . Bankers own the earth. Take it away from them but leave them the power to create money, and with a flick of a pen, they will create enough money to buy it back again . Take this great power away from them and all great fortunes like mine will disappear, for then this would be a better and happier world to live in . But if you want to continue to be the slaves of bankers and pay the cost of your own slavery, then let bankers continue to create money and control credit.” – Sir Josiah Stamp, president of the Bank of England and the second richest man in Britain in the 1920’s, speaking at the University of Texas in 1927.

“I am afraid the ordinary citizen will not like to be told that the banks can, and do, create and destroy money.” – Rt. Hon. Reginald McKenna, former Chancellor of the Exchequer and Chairman of the Midland Bank (now part of HSBC) in Great Britain, addressing a meeting of shareholders on 25th January 1924 (quoted in the 1964 edition of “Promise To Pay” by R. McNair Wilson).

“When a bank lends it creates money out of nothing.” – From “Trade, Depression and the Way Out” by R. G. Hawtrey, one time Assistant Under-Secretary to the Treasury (USA).

“The essence of the contemporary monetary system is the creation of money out of nothing, by private banks’ often foolish lending.” – Martin Wolf, Chief Economics Editor of the London Financial Times, dated 9th November 2010:

If you want to start storing your wealth securely in gold bullion, i highly recommend opening a FREE account at karatbars.com and having a look at their professional certified gold products.